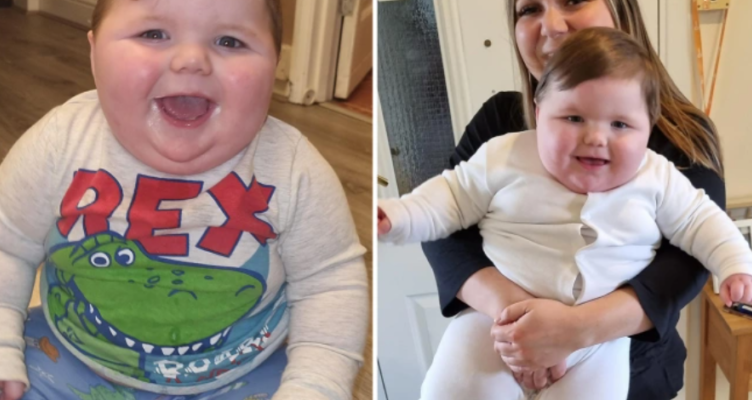 AN 11-MONTH-OLD weighs almost the same as his five-year-old sister – and is nearly half the size of his mum.Arley is not even one but already wears clothes meant for three-year-olds and tips the scales at more than double most boys his age.The youngster is so long he reaches mum Mollie Apps’ hips when standing upright.And he is such a whopper, she regularly struggles to cart him up the three flights of stairs to their flat in Essex.

Mollie, who is 5ft 3in, said: “He is massive.“He weighs almost 3st (19kg) so he is quite heavy, and he is currently in two-to-three-years clothing.“Honestly he’s amazing. He’s not just chubby but big long ways, just in every way possible he’s big.“The size difference between him and his five-year-old sister is crazy.“She weighs 3st 4lbs (20.9kg) but Arley definitely feels much, much bigger.”

Despite his chunky appearance, Mollie said Arley clocked a comparatively unremarkable 10lbs (4.5kg) when he was born on May 17, 2021, and showed no signs of being a larger baby until months later.“They say babies lose weight once they’re born, but Arley only ever put it on,” she said.

“No could we have predicted Arley would be so big.”Mollie, 26, insists her son “doesn’t eat that much generally” and knocks back three kid-sized meals a day.He also “loves his fruit and milk” but has just two to three portions every 24 hours.Arley does, however, love to scoff some chocolate when his sister Lyla chows done on it.

“He does love a bit of choccie every now and then, especially when he sees his sister eating some,” she said.Most of the time, Mollie and her partner don’t think much of their son’s size, but it poses a problem for his petite mum when climbing the stairs in her apartment block.

‘HE IS MASSIVE’
Mollie said: “I live on the top floor. It’s only three floors but there is no lift so I definitely feel like I should have bigger arm muscles than what I have right now.“I also have a hernia come up to my stomach.“It isn’t caused from carrying Arley, but it’s from my C-section which I had to have because Arley was too big to come the other way.

“I’m going for an operation to get it sorted in a few weeks, but I can’t do any heavy lifting afterwards so I don’t know how I’m going to carry my boy.”Despite injuring herself, Mollie, who works in administration for a pharmaceutical company, said she couldn’t love her son more – and everybody else does too.“People always say what a beautiful boy he is and how happy he looks,” she said.

“They also say he looks like a two-year-old. I get that a lot.“Or he should be in the Guinness World Records book. I’d love that.”The average UK baby boy weighs 7lb 8oz (3.4kg) when born, and 1st 6.7lb (9.4kg) aged 11 months.Arley’s current 2st 10lbs (17.5kg) weight puts him off the charts for boys his age, according to the Royal College of Paediatrics and Child Health.