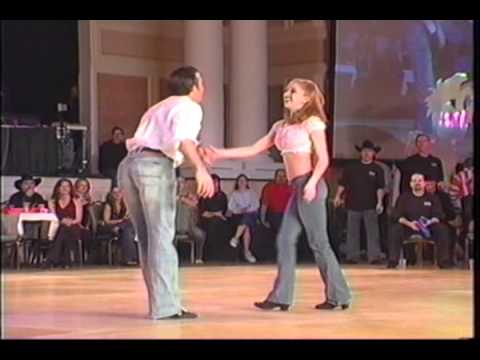 A video showing Katie Boyle and Jason Calacino perform the Honky Tonk first posted in 2011, has been viewed over 8 million times.

Jason has been known for a particular style of dancing called the West Coast Swing. When he became a teenager, he started to get into line dancing. He then went on to learn more intricate dance styles including Argentine tango, salsa, jazz, and even ballroom dancing.

Katie started dancing at just 2-years-old. She continued her training through her college years. At the moment, she works in Pittsburgh, Pennsylvania as a fine arts teacher. In the video below, the pair perform a tough “Honky Tonk” routine to a hit song known as “Honky Tonk Woman.” Even though the beat sounds just like a country song, it was written by Keith Richards and Mick Jagger of the Rolling Stones when they were vacationing in Brazil. The singers have stated that the song was somewhat inspired by “Caipiras” Brazilian music.

Another impressive fact about the pair is how their feet rarely stay on the ground as they dance. This routine includes many lifts that require grace, strength, and incredible balance. It is truly breathtaking to watch. Watch as Jason executes a truly perfect lift. The pair are in their element! Jason and Katie make their fluid movements look easy as they execute flawless lifts, dips, spins, and turns. It is no wonder that the pair was given the first prize in the competition they entered.

Are you ready to see the spectacular Honky Tonk performance yourself? Check it out below:

What did you think of this amazing dance routine? Leave us a comment below. Then pass this on to others!