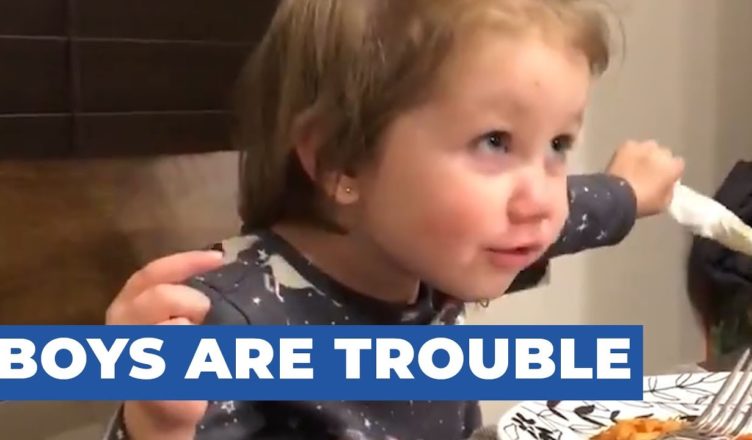 Little girls often joke about having boyfriends, but it usually isn’t until they become teenagers that they are typically allowed to date

While they may dream of their wedding day or meeting their soulmate, it’s really all fantasy until the day they can go on their first date!Of course, not being able to date won’t stop little girls from having their first crushes. Most girls, no matter how old they are, often swoon when their favorite entertainers come on the screen or a super cute musician starts singing their latest hits.Even little girls in pre-school have been known to crush on a classmate from time to time. What could be more adorable or more innocent than a little girl in love?

We found out when a video starring one little girl went viral. This little girl had a crush on her classmate. Overjoyed with her newfound feelings, she knew she had to share the experience with her parents, who had no idea what they were about to experience.The little toddler at the center of this story was having dinner with her parents when she decided to break the good news. She put her fork down, getting ready to spill the beans.She opened her mouth and decided her parents HAD to know:“I got a boyfriend!” She said.Her parents, both shocked and overcome with giggles kept going back and forth with their little girl. “Oh no you do not!”

Her parents said.Despite her parent’s protests, the little girl stood her ground–she wasn’t giving up on love that easily.So her dad came up with a demand of his own. “The boyfriend better be talking to your daddy,” he said, as the little girl grew even more impatient. She couldn’t introduce her new boyfriend to her dad!How would the two even meet? When they all went down for naps? When they were sitting together to eat snacks? She stammered back her response–there was no way she would let that happen.The little girl was so exasperated by the conversation that she just put her head down with her palm against her forehead. She couldn’t argue any more. She gave her dad one more chance to understand what she was trying to say.

“This is MY boyfriend,” she sassily retorted.This little girl definitely doesn’t back down from a fight. We’re unsure of how this conversation ended, but the video of their banter is too cute not to watch. This little girl is one determined debater