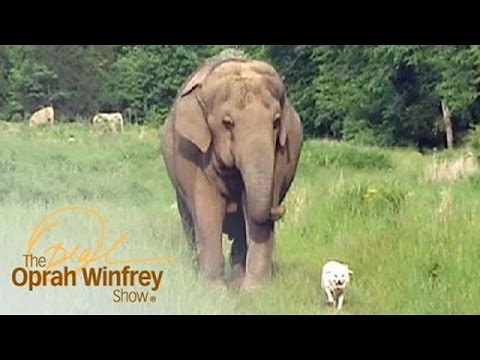 Elephants are among the most intelligent species there are, and according to the National Geographic, their brains are the same as human beings. But elephants are not only smart – they are also very social.These beautiful creatures have the ability to communicate with each other through different sounds, to warn each other of dangers, but also to call their puppies. Like us humans, they also like to play and show emotions.

In an elephants’ shelter farm in Tennessee, the United States, sick and old female elephants have a safe and wide environment to live the rest of their lives surrounded by experts who help them.Today there are 10 elephants in the farm, which is not open to the general public, that are playing with each other.

She wasn’t able to walk

They all have their best friend, but one elephant female, Tara, has developed a special relationship with a female dog named Bella. These two do everything together.But when Bella was injured in the back and was unable to walk, she had to rest for three weeks in a special rehabilitation center.

Tara took Bella’s injury badly – and refused to leave her best friend.For three weeks, instead of walking around an area of over 7,000 hectares, Tara simply stood outside the rehabilitation center and waited for Bella to come out and play with her again.

After standing in the same place for days, week after week, the 35-year-old elephant finally got together with her best friend Bella.
Watch the amazing video below and don’t forget to share this beautiful story of unique friendship with your friends and family.