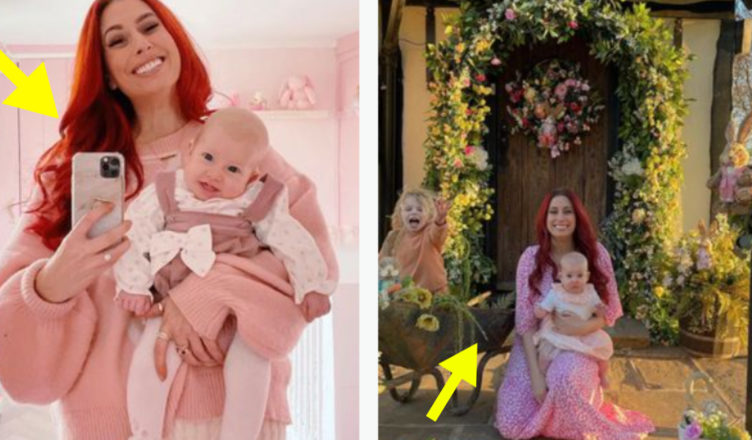 Stacey Solomon wants both her hen do and honeymoon to be ‘child-friendly affairs’ as she can’t bear to leave baby Rose at such a young age, pals say0 seconds of 42 secondsVolume 0%

Stacey Solomon is set to bring baby Rose on her hen do as she can’t bear to leave her at such a young age.The Loose Women star will tie the knot with telly presenter Joe Swash in a lavish ceremony this summer.But as her youngest child Rose is just five months old, Stacey reportedly wants both her hen do and honeymoon to be “child-friendly” affairs.

A pal says she had made it clear that she and Rose “come as a package” as she doesn’t want to break her routine.“Between going back to work, renovating Pickle Cottage and organising the wedding, it’s so full-on,” the source told New magazine.“But her main priority is the children, especially Rose as she’s so young. She’s made it clear she doesn’t want to be apart from her at all.”

Stacey can’t bear to leave baby Rose while she is so littleGet all the biggest showbiz news straight to your inbox. Sign up for the free Mirror Showbiz newsletter.Mum-of-four Stacey is said to want “laid-back” celebrations, preferably with other children there too.

The pal continued: “She doesn’t want a big night out getting drunk. The hen weekend will be wild in a different way. After all, nobody will be getting much sleep with a baby there!”

But her friends are keen for 32-year-old Stacey to have at least one weekend off to be able to enjoy herself.

While husband-to-be Joe is keen to give Stacey what she wants, he also wants to spend some quality alone time with her, especially on their honeymoon.

Stacey is said to want a ‘child-friendly’ hen do and honeymoon ( Image: Instagram)
Last year, Stacey’s sister Jemma Solomon organised a surprise hen do for her and whisked her away on a ‘party bus’.At that point Stacey was pregnant with Rose and had postponed the wedding due to Covid and the fact she wanted all her kids to be there.

But the hen do still went ahead as Jemma, 33, was unable to cancel the bash due to the ever changing lockdown restrictions.Sharing a clip on her Instagram, Stacey said: “When you’re about to put your PJs on and settle down for the night.“And your sister turns up and tells you she couldn’t move your hen so ‘get an overnight bag and get on the party bus Stace.

The sisters went on to share a series of snaps and videos over the weekend as they lived it up at Ashlin Farm Barns in Lincoln.While the other girls got stuck into G&T’s, pregnant Stacey munched on carrots and hummus.But she still got to enjoy the fabulous garden, outdoor terrace and huge hot tub at the property.

Posing in a bikini, Stacey joked: “I just can’t believe this weather. I’m in a bikini with a diet coke and there’s not a nappy or skid mark in sight.”It is not known yet where Stacey will have her hen do this year, but we’re sure sister Jemma has more fun plans up her sleeve.